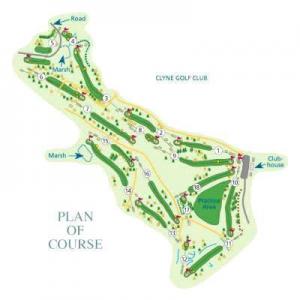 CLYNE GOLF CLUB, steeped in history but focused firmly on the future.

Designed by the legendary Harry Colt, the course offers a fine test of golf for all levels of handicap and we are justifiably proud of our connection to a man whose design and influence can also be seen at Muirfield, Sunningdale, Royal Lytham & St. Annes, Real Golf Pedrena (Seve’s course), and many other courses around the world.  The course was officially opened on 4th May 1921.

Our fabulous club and course, which is in the very best of health, has a long and rich history. Our first professional was Percy Allis who was one of the leading golfers of the time. His son Peter, a Ryder Cup player and legendary broadcaster, included Clyne in his book about the best courses in the UK. Former Masters champion Ian Woosnam played here while ranked in the world’s top 10 and recently Ken Brown described Clyne as a must visit for fans of golf course design.

Colt might be described as the founder of golf course architecture in the British Isles, softening its lines, introducing curves and creating visual challenges to tease and intrigue the golfer. Above all, he was the first to appreciate how golf could be a delightful walk through beautiful vistas, something that can truly be appreciated at Clyne. Situated on the high ground of Clyne Common, our moorland course remains part of a dramatic and ever-changing landscape.  The 2nd 9 holes were constructed first and were in use for nine months before the full 18 holes opened.

The original lay out by Harry Colt remains today, with many natural hazards residing on the undulating ground as well as many little pot bunkers often hidden from view around humps and bumps.  Gorse and bracken surround the rolling fairways which are reasonably wide but, as you’d expect, a battle with the elements is always on the cards here and the swirling breezes at its highest points can easily blow you offline.  The key for success here is how you handle approach shots.  The putting surfaces are very special, even paced throughout and the soft springy turf gives welcome receptiveness.  Finding them on a regular basis will lead to low scores; however, slip off the straight and narrow just a touch and the penalties can be severe thanks to regular steep run off areas and fluffy spots of heathland growth in close proximity.  Despite its lofty position the course is never too difficult to walk, and never are you too far away from a stunning view of this area of outstanding natural beauty.

Major developments have taken place since 1995, with the course improvements resulting in the approval and recognition to meet County Standards. We now have a challenging 72 par course which frequently hosts County events.